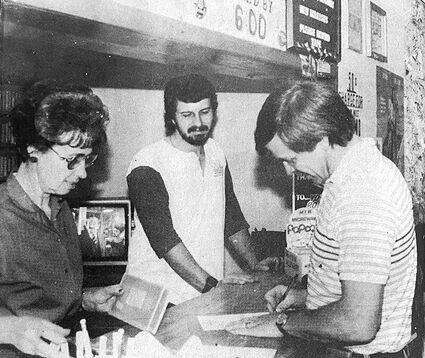 WILMA AND son Norm Tanner assist customer Dr. James Ley after he has selected a movie to rent from the many titles available at the Video Barn.

First prize was awarded to Jean Kluger of Fleming, at the amateur show at the Rialto Theater Tuesday evening. The audience chose Mary Clark, tap dancer, for second prize, and Lawrence Carsten, who sang and played the guitar, as third-place winner.

Shirley Ann Brahmstadt, the two-month-old daughter of Mr. and Mrs. Henry Brahmstadt of Paoli, passed away at a Holyoke hospital last Wednesday.

Hospital News - Mr. and Mrs. Robert Griffith are the parents of a son born Friday. He was named David Saul.