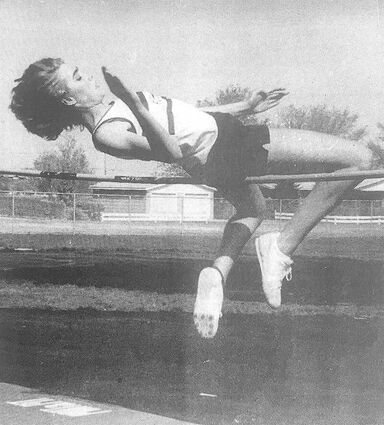 Another business firm in Haxtun changed hands this week when Ruby's Cash Market was purchased by H.B. Prouty and son Floyd. Floyd will be in charge of the store, which is located in the Shirley Hotel building.

Clinton Jeffers was high-point man of Monday's Haxtun-Holyoke track meet with a total of 22 points. Arden Sack was second with 21 points. Donnelly of Holyoke had 17, and Clyde Jeffers had 16.

Mrs. Julia McCulloch of Holyoke was a Haxtun visitor Tuesday evening. Her son Lawrence, who is stationed at the AF base at Amarillo, Texas, will be home next week on a 20-day furlough before going to Alaska.

Michael Ragon has been offered head coaching of both varsity boys' football and basketball teams for the next year. He will also teach science in the absence of Jim Davis, who has resigned his post with science and football. Elden Reutter is the Haxtun School superintendent.

Members of Haxtun Brethren Church opened their anniversary celebration this past Sunday by releasing 75 balloons. The church organized before 1917 but moved into the church building that year.

Catina Klinzmann was selected as artist of the month for February at Haxtun School. She is the daughter of Pat and Ellen Klinzmann and is a junior.

Seniors Jeff Allen, Fleming, and Kent Hiller, Haxtun, have demonstrated strong character and a determination to succeed in life and so have been named Daniels Scholars who will receive funding to attend the college or university of their choice, as announced recently by Linda Childears, President and Chief Executive Officer of the Daniels Fund.