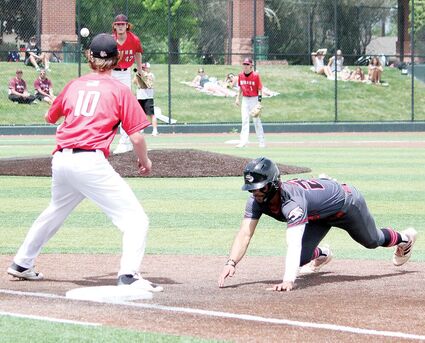 BULLDOG PITCHER Jerron Turney fires the ball to first baseman Keegan Colglazier in attempt to get an out on a Holly baserunner on Thursday afternoon.

The Bulldog baseball season came to a close Thursday afternoon at All-Star Park in Lakewood. Haxtun played in the second semi-finals match up of the day against the Holly Wildcats. The seventh seeded Bulldogs took on sixth ranked Holly following Regional wins the week before.

Game one of the day featured fellow final four finishers Merino and Nucla. That contest was all Rams as the fellow Lower Platte League opponent rolled to a 18-0 win to advance to the Championship later in the day.

Contest two featured Haxtun and Holly. By first pitch, temperatures soared into the 80s as junior...