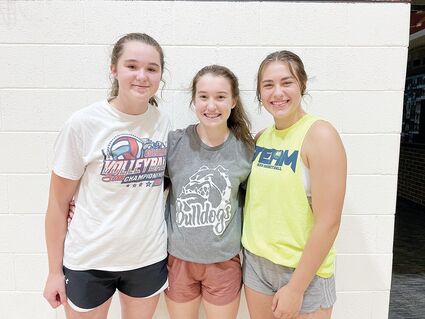 The Haxtun Lady Bulldogs kicked of the 2022 season with the annual Sedgwick County tournament last week. This year's team boasts 29 players under the direction of Head Coach Don Schelling and Assistant Coaches Marissa Schelling and McCall Etl. Don Schelling is in his first season as head coach following his role as an assistant coach for the team last season.

Under the direction of last year's Head Coach Paige Thompson and Schelling as her assistant, the Haxtun Lady Bulldogs went 24-5 while earning a 7-1 league record, according to MaxPreps. The team made the final four at the 1A State Volleyball tournament in Colorado Springs.

Over the summer, Don Schelling said his team put in work to better themselves on the court including lifting weights three days a week and regular attendance at summer league competitions in Sterling. The Lady Bulldogs also attended camp in Ogallala and Kearney, Neb. throughout the summer months.

"Our goal is to continue to get better every day," said Don Schelling. "We have really been working on our serve receive and defense, which is a big part of volleyball."

While a State Championship is the big objective of every team, including the Lady Bulldogs, Don Schelling said he also wants his team to take necessary steps to get there including a big goal of winning their own respective league. "And then the Regional Championship, making it to State and having a good shot of winning it," he said.

The Lady Bulldogs kicked off practice in early August and took the court in a scrimmage against Otis and Brush at home before officially beginning play in Sedgwick County this past weekend. This week, the Lady Bulldogs will travel to Northeastern Junior College for more tournament play where they will see teams in their own region including Caliche, Merino, Otis and Dayspring Christian Academy.

On Friday, Sept. 2 the Lady Bulldogs are set to travel to the home of the Lady Dragons in Holyoke for a Phillips County matchup. According to MaxPreps, Haxtun will host their first home game on Tuesday, Sept. 20 when the Wray Lady Eagles come to town.

"I am excited to get the season started," Don Schelling said. "I am excited about this group of girls. We are young will probably take some bumps along the way but we have a lot of talent. We appreciate the support of our community, Haxtun always has a great following, and we are just looking forward to representing our school and community well."