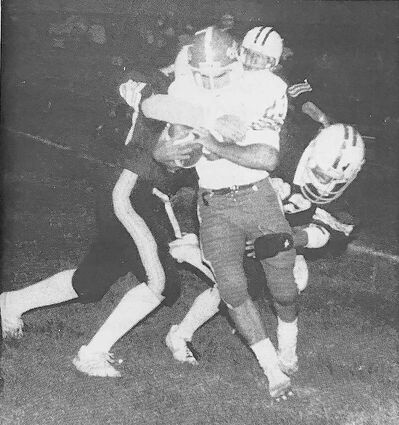 IT TAKES TWO Revere defenders to bring down Jim Switzer on a running play during the Haxtun/Revere game Friday night.

Mr. and Mrs. Lloyd Eller and two sons and a daughter were guests of Eller's mother, Mrs. Magalene Eller, at the George Gueck home north of Haxtun last week. The Eller family is returning from a world tour. They are in their 15th year of missionary work in India and have twice made the trip around the world.

Funeral services for George William Lindgren, were held Wednesday afternoon at the Radford Funeral home in Haxtun. The little boy had reached the age of four years, five months and 27 days.

Mr. and Mrs. Joe Skold and daughters returned to their farm in th...