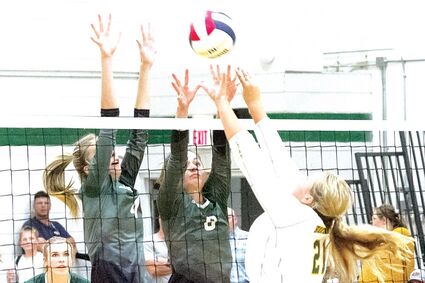 FLEMING LADY WILDCAT blockers freshman Ashley Bornhoft, left, and senior Maddy Harms go up for a block against a Peetz Lady Bulldog hitter in their home opener in late August.

Last week's action on the volleyball court brought sweeps number four and five for the Fleming Lady Wildcats who now stand at 7-2 on the season. Fleming opened with a sweep over Akron on Tuesday, Sept. 6 and followed up with a road sweep over Weldon Valley on Thursday, Sept. 8.

Freshman setter Ciana Lousberg put up 16 sets for the Lady Wildcat hitters in the contest.