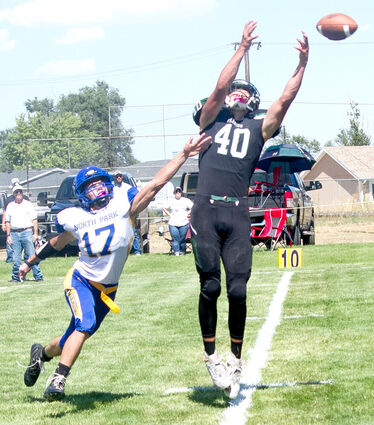 FLEMING SENIOR Harry Harms reaches for a pass in the Wildcats' season opener against North Park in late-August.

The Fleming Wildcats came back in full force last weekend with a league win over the Peetz Bulldogs. After game forfeits and cancellations followed by an 8-man loss to Haxtun, the Wildcats returned to 6-man action last Saturday.

With just two contests under their belt in the sixth week of the season, the Wildcats own a 4-1 overall record with an undefeated league record of 2-0. Fleming sent North Park and Idalia packing to open the season in weeks one and two. A Granada forfeit and cancellation in weeks three and four kept them off the field.

They returned to action at Haxtun last week...