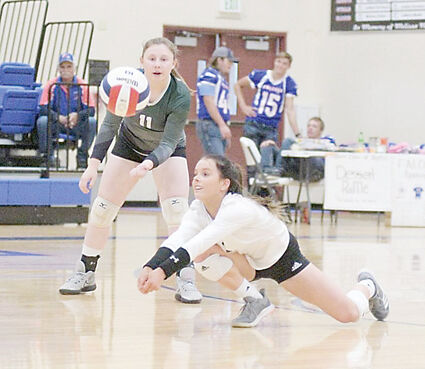 FLEMING SENIOR Lexi Schaefer gets low for a pass in Friday night action at Briggsdale as senior Laney Schliesser looks on. Schaefer led her team in digs with 13 and on serve receive with 17 in the contest.

Fleming's Lady Wildcat volleyball team went 3-0 last week in contests with Holyoke, Briggsdale and Caliche. The team hosted Holyoke on Tuesday, Oct. 18 to open the week before traveling on back-to-back nights for weekend action on Friday and Saturday.

Tuesday night's matchup marked the second of the season between the Lady Wildcats and the Lady Dragons of Holyoke. Fleming swept 2A's Lady Dragons on both occasions - 25-12, 25-12 and 25-18 in the most recent outing.

Senior Lexi Schaefer earned a double-double with her back row performance. She led her team in both digs and serve receive with 18 and 11, respectively.

In addition to aiding the Lady Wildcat hitters, Kirkwood led from her position at the net. She put 17 kills on the floor in the contest. Freshman Quincy Stull followed with five kills.

Schaefer took top honors in the serving category with four aces for the night. Lousberg and Kirkwood followed with an ace apiece.

Freshman Ashley Bornhoft led Fleming's defense at the net with three blocks. She earned one solo and two assisted. Kirkwood, as well as senior Maddy Harms and juniors Madi Serrato and Kylie Bretz-Hoskins each put up a block.

Friday night's play put the squad on the road to Briggsdale where they faced off with the Lady Falcons for the second time this year. Briggsdale took the local ladies to four sets in their last showing before eventually taking the loss. This time, Fleming swept, 25-21, 25-23 and 25-13.

Kirkwood's contribution at the net included 23 kills with a single error as well as 13 assists.

Lousberg followed in the kill category with five for the night. She led from the setter's position with 18 assists and also led from behind the serving line with two aces. She committed one error on 19 serving attempts.

Schaefer led her team from back row for the second consecutive game. She put up 13 digs and received 17 serves. Senior Laney Schliesser followed receiving 13 serves in the match.

On Saturday, Fleming traveled to Caliche where they earned their second sweep of the season over the Lady Buffaloes. Their most recent contest ended with the Lady Wildcats out in front 25-17, 25-17 and 25-12.

Schaefer and Serrato combined for eight points on aces for the match. Both players put over four perfect serves. Kirkwood, Harms, Schliesser and Stull served 100 percent from behind the serving line.

Kirkwood added double digits in two categories. She led her team from the front row with 18 kills and from the back row with 11 serve receives.

Schaefer led defensively from the back row with 14 digs. Serrato added antoher six.

League contests for Fleming came to a close with Friday's match at Briggsdale. The Lady Wildcats earned an undefeated 8-0 league record this year.

They are slated to go up against the Merino Lady Rams on Thursday, Oct. 27. The defending State Champion Lady Rams hold an 18-3 record on the year and 6-1 in their league with a late-September loss to Wiggins. They've held the top spot in Colorado High School Activities' Association 1A rankings for the majority of the season.

Fleming met up with Merino in tournament action earlier this year. That match resulted in one of their four losses of the season. MaxPreps lists a 2 p.m. start time for Thursday's action.

The regular season comes to a close on Friday, Oct. 28, with a home match against the Stratton Lady Eagles.

Stratton enters at 15-7 overall. Their most recent contest against Briggsdale ended with at Lady Falcon sweep. Matches on Friday are set to begin at 4 p.m. according to MaxPreps.