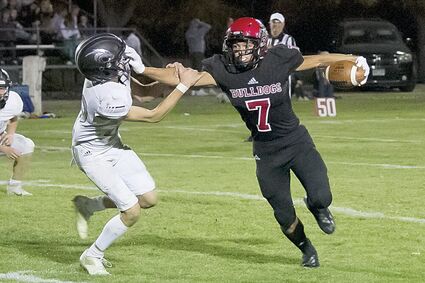 HAXTUN ball carrier #7 Kyle Fryrear fights off a Sedgwick County defender in a match up of the two Plains League teams a week and a half ago. The Bulldogs recently clinched the Conference title while the Cougars ended their season at Dayspring Christian over the weekend.

For the second consecutive year the Haxtun Bulldogs are Plains League Champions! The Bulldogs officially clinched the title with a final regular season win in Merino on Friday night. The team's 9-0 record gives them the top spot in Colorado 8-man action, a ranking the Bulldogs have held all season, and home field advantage through the post season. Haxtun remains one of five 8-man teams in the State with unblemished 9-0 records. The four others include Simla, Lyons, Crowley County and Dove Creek. Only one of those teams is on the same side of the 2022 playoff bracket as the Haxtun Bulld...