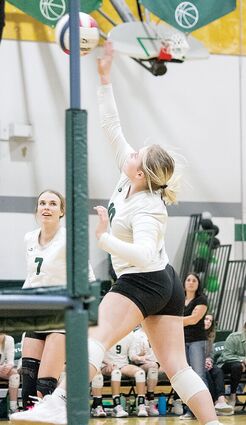 FLEMING SENIOR Maddy Zink goes up for a kill in the Lady Wildcats' last regular season match last Friday. The Lady Wildcats swept the Stratton Lady Eagles that night and move into the post season this week as the fourth ranked team in 1A.

The Fleming Lady Wildcats wrapped up their regular-season play last week at 1-1 with a loss to top-ranked Merino and a victory over Stratton. The Lady Wildcats have earned the fourth spot and home court advantage for Regional play slated for this weekend.

The defending champion Merino Lady Rams visited Fleming last Thursday for the second match between the two squads this season. For the second time, the Lady Wildcats took the Lady Rams to four sets - a challenging feat against a team who owns 17 sweeps in the 23-match season.

Fleming fell in the opening set, 25-16, but bounced back to take set two 25-22. The two teams battled in a long set number three, but Merino came out ahead 27-25. The fourth set settled at 25-20 and sealed the match win for the Lady Rams.

Schaefer also hit the 30s in serve receives. She led the Lady Wildcats with 36. Emoree Lousberg and Kally Kirkwood followed with 19 and 13 receives, respectively. 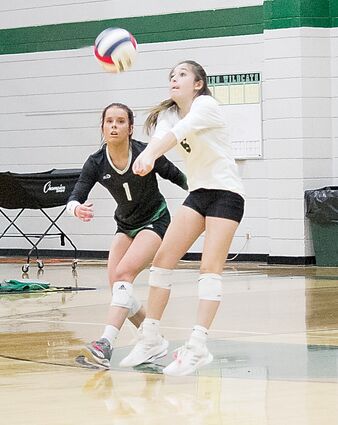 Kirkwood led all-around at the net. She put 18 kills on the floor while assisting with 15 and added five total blocks for the defense.

The Lady Wildcats swept Stratton at home to conclude the regular season on Friday. Individual stats from the match were not reported.

Post season play is set to begin on Saturday, Nov. 5. As the highest-ranked team in their pool, the Lady Wildcats are scheduled to host. The day's action brings 13th ranked Cheraw and 21st ranked Belleview Christian to Fleming. The Lady Wildcats take the court for the opening and closing matches of the day. Matches are set to start at 4 p.m.