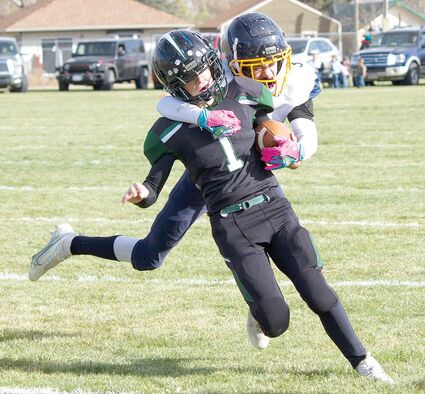 WILDCAT FRESHMAN Wyatt Sonnenberg added 16 rushing yards for the Wildcats before his debut season came to a close. Sonnenberg was brought down hard on the drive pictured above which resulted in a broken humorous.

The second ranked Fleming Wildcats hosted the 15th ranked Hanover Hornets last Saturday for a blustery opening round of playoffs.

Fleming jumped to a quick 16-0 lead in the opening minutes of play and then doubled their score by the end of the half all the while holding Hanover out of the end zone.

About midway through the third quarter with a Wildcat lead of 42-0, Head Coach John King started utilizing some of his younger players. Freshman Wyatt Sonnenberg carried the ball several times and picked up 16 yards for the Wildcats before a hard tackle put him the back of an ambulance. Later...