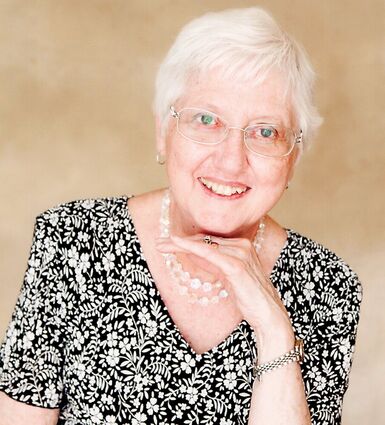 Jo Anne (Sovereign) Harris passed away with family by her side Nov. 7, 2022 at 81 years of age in her home in Haxtun.

Jo Anne was born Oct. 23, 1941 to Erwine and Catherine (Crookham) Sovereign in Monmouth, Ill. Jo Anne grew up in Roseville, Ill. and graduated from Roseville High School in 1959. She then attended and graduated from Western Illinois University with a major in Business Education and was a member of the Sigma Kappa sorority.

Although they were in the same class growing up, Jo Anne didn't date her future husband until after they both graduated high school. Jo Anne married William "Bill" Harris Dec. 23, 1961 at Roseville Christian Church and they were married for almost 61 years. They were fruitful and multiplied, being blessed with four children: Kelli Jo, John William, Jennifer Lynn and Suzanne Renee.

After marrying, Jo Anne finished college and began her first teaching position at Eureka High School in Eureka, Ill., teaching English and commercial subjects. She and Bill then moved to Wyanet, Ill., where she taught until they moved to Metamora, Ill., and she was hired as the Superintendent's Assistant. Their family had grown by this time and while her husband taught and coached, Jo Anne stayed home with her children and babysat for a few other families, as well.

In 1977, an advertisement for a mom-and-pop grocery store caught Bill and Jo Anne's eye and they entertained the idea of moving to Colorado to buy and operate the small store. They took a family vacation to Colorado in the later summer to see what the adventure would hold and while discussing whether or not to move forward with the purchase, Jo Anne said, "Let's do it!" Together they moved their four young children to Haxtun in October of 1977 to purchase A & F Grocery on Main Street from Frank and Allene Baumgartner. Three months later they bought the grocery store across the street, known then as Baker's Food Liner. Jo Anne and Bill owned and operated Harris Grocery & Market for 11 years, becoming a part of the Haxtun community. After the sale of the grocery store in 1989, Jo Anne worked in the insurance industry for several years, first in Haxtun and then in Holyoke, until she became employed at the Haxtun Telephone Company. She retired at the age of 75.

Jo Anne was a member of the Haxtun United Methodist Church and served in various ways over the years. She particularly enjoyed refreshments after Sunday church services to catch up visit with her friends.

Jo Anne was a longtime sister in the local P.E.O. chapter and faithfully committed to making gallons of homemade ice cream and attending many meetings, brunches, lunches and trips over the years carrying out her member duties.

Jo Anne also faithfully attended her children's many events while they attended Haxtun Schools and then followed her grandchildren and great-grandchildren in their various activities, too. She was a fan of the Chicago Cubs and the Chicago Bears and watched and listened to many, many, many games.

One of her favorite past-times over the years was playing Bridge, nearly every week. She enjoyed the challenge and competition of the friendly, yet serious, competition and when she would return home, she'd report how she and her partner played; sometimes well, and sometimes the other ladies just "had the right cards." Her family knew when it was her turn to host the game when the house had to be cleaned and out came the good dishes. She fostered many long-term, loving friendships in Northeast Colorado playing the game.

Memorial contributions can be made to Haxtun United Methodist Church or Haxtun P.E.O. chapter and can be sent to Baucke Funeral Home, 128 South Ash Street, Yuma, CO 80759.