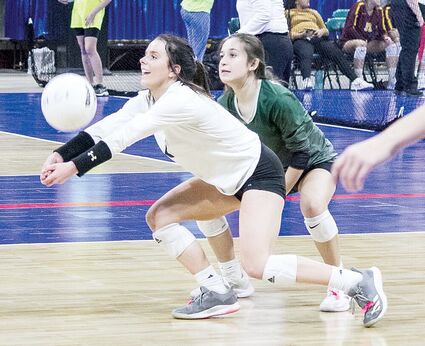 LEXI SCHAEFER, Fleming Lady Wildcat senior, receives a serve in the State Championship match against Merino on Saturday evening at the Denver Coliseum. The Lady Wildcats met the Lady Rams in the Championship for the third consecutive year.

This year's seniors - Lexi Schaefer, Kally Kirkwood, Maddy Harms, Maddy Zink and Laney Schliesser - sought to repeat the success of their freshman season as they entered the Denver Coliseum among the best in the State last week. Their debut season was the last the time the Lady Wildcats brought home the 1A title.

Fleming entered this year's State showing in the number four slot which afforded them an opening r...