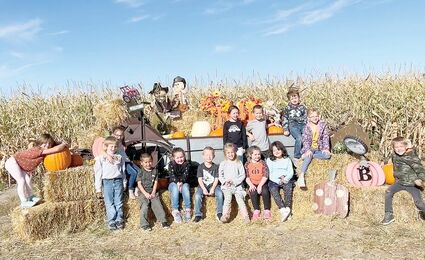 Fleming kindergartners in Mrs. Cindy Johnson's class recently shared their favorite Thanksgiving recipes. Below is a favorite from each student:

First get the grill going and drain the blood off the bird. Then put the turkey on the grill for five minutes. Take it off, then eat it.

Get the meat, heat it on the stove for like 10 minutes. I put the pepper thing on to make it gooder and spicier and add salt. You put leaves that come out of salads on it.

Get pumpkins, put them on the stove, then you have pumpkin pie.

You put it in the oven at 11 degrees for nine hours then you tear it off the bone and eat it.

Cook them in the oven for 30 minutes at 10 hot. Put butter on them and eat them.

Get potatoes and put them in the pot with water maybe 23 minutes. Stir them. You get them out of the pot and blow on them to cool them down. Add flakes and soy sauce and mash it and put it in a bowl and eat it.

Grandma gets a potato and smashes it in a pot and puts salt and pepper on it and it's done.

Get potatoes and salt and pepper. Put them in the pot and cook for 60 minutes then you eat them.

Get a pumpkin and carve it and put it in the microwave for five minutes. Put it in the freezer for six minutes. I put cinnamon on it and eat it.

Well, first you shoot it, then you take off the feathers. Then you put in on the grill for five minutes. You add seasoning. I think that's it.

Get a pumpkin, put it in the oven for 29 minutes. Wait for it and I think that's all.