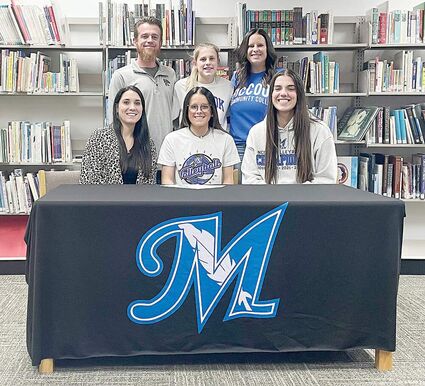 The completion of an accomplished four-year high school volleyball career brought the opportunity for Fleming senior Lexi Schaefer to compete at the collegiate level as she continues her education next fall. Schaefer announced her intention to play volleyball with the McCook Community College Lady Indians last Thursday, Dec. 8, as she pursues an Associate's Degree in business by signing a letter of intent in the Fleming School/Community Library surrounded by friends and family.

Schaefer has made contibutions to the Lady Wildcat squad who has competed in the 1A State Volleyball Championship for all four years of her high school career. Those teams have earned three runner-up trophies and one State title.

She's earned All-Conference accolades for the past three years and was most recently named to the Colorado High School Activities' Association's All-State Second Team.

As a defensive specialist, Schaefer led her team in digs this season, averaging 3.7 per set and 11.6 per match. She tallied a total of 302 digs on the year.

She also led her team on serve receive with 345 receives in the 82-match season. She averaged 13.3 receives per match.

Schaefer made a top contribution to her team from behind the serving line. She added 35 aces on the year, her career high. She finished the year with an 84.6 serve percentage after serving for 172 points.

Schaefer is the second Fleming Lady Wildcat senior to sign a letter of intent this year. Classmate Kally Kirkwood announced her intention to play for Chadron State College last month.