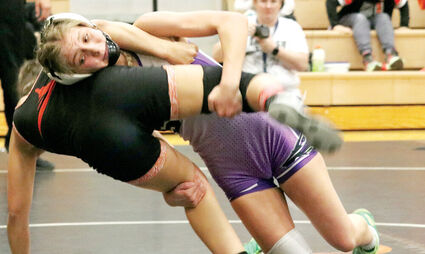 100-POUND SENIOR Destanie Engle is working for a takedown against Bayard's Carlie McKibbin. Engle finished her day in third place and now has a record of 8-5 on the season.

The Sedgwick County/Fleming wrestlers had a busy weekend which started with participating in the Elm Creek Invitational on Friday, Jan. 13. They ended the day with a third place team finish for the boys and four champions.

On Saturday, Jan. 14, the team traveled to Imperial, Neb. to participate in the Chase County Invitational. The girls ended their day with a sixth place team finish out of nine teams and one champion and the boys finished in third place out of 20 teams with four champions.

Results from the Elm Creek Invitational: