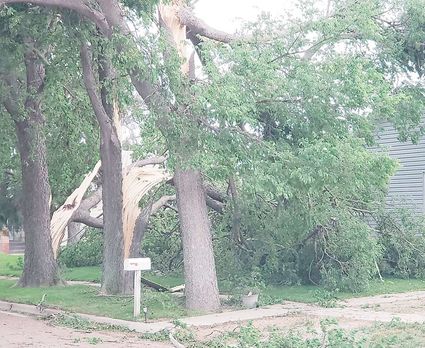 WINDS on Monday night, June 8, not only uprooted trees from the ground, but also split them in peculiar ways like these three that were split down the middle.

Waking up on Tuesday morning was like a dream, a really bad dream. Storms that struck the Haxtun area on Monday night, June 8 and into the early morning hours of Tuesday, June 9, tore through the community, ripping up entire trees, knocking out power and causing damage some say can only come from tornados, although there was no official sighting of one.

Some reports from the weather service have indicated the damage was from a derecho, a straight-line wind storm that is associated with a fast-moving group of severe thunderstorms. Derechos can cause hurricane-force winds.