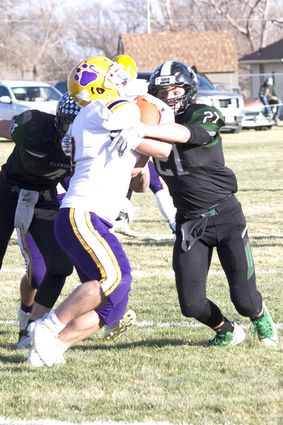 A Saturday afternoon quarterfinal win over the number-eight ranked Kit Carson Wildcats allows the number-one ranked local Wildcats to advance to the semifinal round of 6-man playoffs later this week. The Fleming Wildcats hosted Kit Carson on Saturday for the opening round of playoff action and quickly sent the visiting Wildcats home with a completed season.

Kit Carson received the opening kickoff and chipped away at yardage on the ground. The visiting Wildcats ran several plays before they'd find the end zone on their opening campaign with just under three and half minutes off the first quarter clock. They'd put one through the uprights to go up 8-0.

Fleming offense took the field for their opening possession and ran a couple plays to gain around five, before senior Charles Hobbs took the third-down call and ran one back nearly 45 yards for a touchdown. A points-after kick by sophomore Kenny Bandy sailed wide and the local Wildcats trailed by two, 8-6.

Kit Carson took over for their second possession and gained some ground that would eventually put them inside Fleming's 10-yard line on third down. Kit Carson's quarterback found a reciever in the end zone and attempted the TD pass, but Fleming sophomore Blake Feather swooped in for the interception.

The Wildcat offense returned to work running a couple quick plays to pick up around 10 yards before sophomore Nolan Japp came up big on a 70-yard run for six. Bandy's kick sailed through the uprights for two to put Fleming in control, 14-8.

Feather would grab a second interception a few minutes in to the second quarter and a hand off to Hobbs would put Fleming deep in Kit Carson territory. Senior Chris Goss took the call a few short plays later and punched one for another Fleming six. Bandy made good on his attempt for two and put Fleming on top 22-8.

The local Wildcats regained possession after the defense shut down Kit Carson's running game. Fleming took over on downs and capitalized a few plays later on run by Hobbs putting the Wildcats in green up by 22 in the second quarter.

Fleming would continue to dominate for the remainder of the half adding two more touchdowns with successful PATs. They would head to the locker room at the half with a 44-8 lead over Kit Carson.

Fleming received to open the second half, but quickly turned over the ball. The defense held strong and forced a fourth down Kit Carson punt. The offense would take over to find the end zone again to go up 44 points.

With just a little over three minutes left in the third quarter, the Wildcats would strike again, this time sophomore Kolten Houser would own the TD, 45-point mercy rule would be implemented and the clock would run for the remainder of the game.

Kit Carson's offense would tally six more before the end of the third, but still trailed 58-14.

The two teams would trade possessions with neither team adding to their tally and the game would close at 58-14 ending Kit Carson's season.

Fleming's offense ran a total of 33 plays on the day and converted three first downs,

Senior Kade Comstock held the quarterback position for most of the game. He completed three of five passes for a total of 88 yards. His long throw of 43 yards connected with Kuntz, the leading receiver for the day.

In total, the Wildcat offense saw 571 yards for the day. Goss led in all purpose yards with 174 split at 144 rushing at 30 receiving yards.

Sophomore Braylen Feather spent some second-half time under center. He completed one of two passes for four yards.

Kuntz led in receiving yards with a total of 58 off two catches. Both of his receptions resulted in touchdowns.

Goss followed in receiving with 30 yards off one catch. Houser's lone catch completed Fleming's receiving game and gave him four yards in the air.

Goss led the Wildcats' ground game with 144 yards on six carries. He ran for a long of 75 yards and scored two rushing touchdowns.

Hobbs followed in rushing yards with 119 on five carries. He ran for a long of 43 yards and scored one touchdown.

Japp also hit double digits in rushing yards with 100 including a long run of 70 yards. He carried the ball five times and found the end zone twice.

Four Wildcats hit double digits on the scoreboard in the contest. Goss, Hobbs and Kuntz each scored two touchdowns for 12 points apiece. Kicker Bandy went five for eight on points after attempts to give him 10 points in the game. Houser and Japp rounded out Fleming's tally with one TD each for six points. 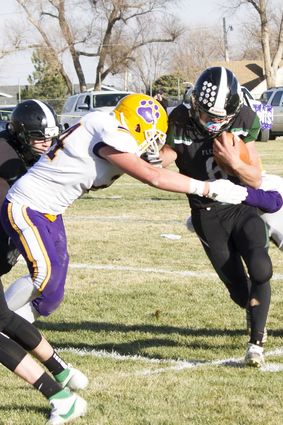 The Wildcats are now set to take on the Granada Bobcats in a rematch from the final week of regular season play. The two undefeated teams met up just two weeks ago on Fleming's home field and the Wildcats ended Granada's undefeated season in a contest that ended 49-44.

In the bottom half of the bracket, the number-two ranked Stratton/Liberty Knighted Eagles will take on number three, the Cheyenne Wells Tigers.

With just four teams left in the bracket, this week's games will determine who will play in this year's Championship contest. That finale is set to be played on Thursday, Dec. 3 at 2 p.m. in Pueblo.