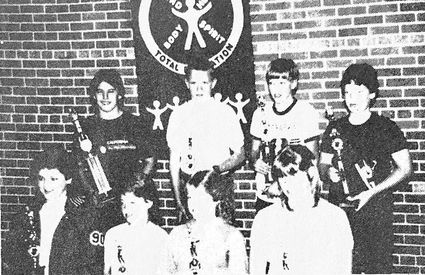 SEAN GILLOTTE, son of Mike and Val Gillotte, was among the State winners in the Knights of Columbus Hoop Shoot held recently in Sterling. Sean, who competed in the 11-year-old boys' division is pictured above, back row far right. This was his first competition in Hoop Shooting. Other winners are front row (l-r), Tina McCaffrey, Lana Smith, Michelle Jones and Carol Wilterdink; back row (l-r), Dave Corsentio, Jeff Young and Brian Vosicka.

Death: Griffin Wilkinson Crossland, 24, April 14, 1936. In addition to his parents, he is survived by three brothers, Robert, Victor and Arlie, and four sisters, Lucille, Ali...