Bulldogs wrap up season at the 1A State Basketball Tournament 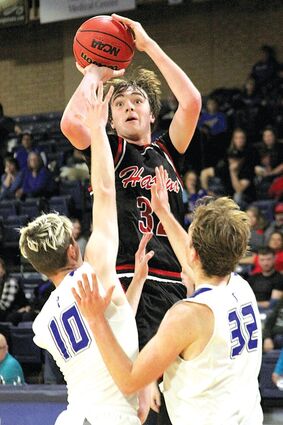 HAXTUN'S Maclin Tempel, pictured above, reaches up and over two defenders for a shot on Friday morning.

While their showing at the 1A State Basketball Tournament wasn't the outcome players, fans or the Haxtun community hoped for, the Bulldogs still have something to be proud of.

The Bulldogs, boasting a roster with five seniors, went 17-8 overall and gave their fans some exciting wins throughout the 16-week season. The team went 8-1 at home and 5-4 on the road while also winning four of three at neutral sites. At their highest point, the team held a five-game winning streak including a win over the then top-ranked Briggsdale Falcons.

The Bulldogs' road to State began at Northeastern Ju...