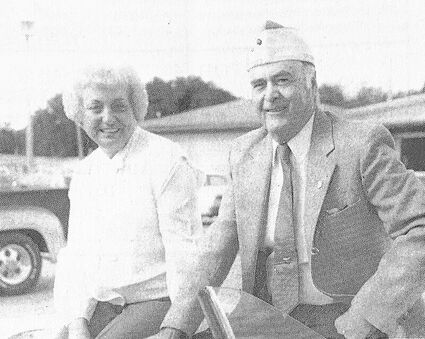 A pretty church wedding Sunday, Sept. 12, at high noon united Miss Dorothy Heldt and Mr. Walter Hovel. The ceremony was performed at the Emmanuel Church with Rev. Jos. Hannewald officiating. Sixty guests attended a reception for the young couple at the home of Mr. and Mrs. Lee Pack immediately after the ceremony.

Billy Hudson was severely injured while participating in the motorcycle races at Hugo. He was taken to the Flagler hospital where x-rays were taken. No bones were broken, but he was severely bruised and scratched. In the same race, another Haxtun motorcycle racer, Lloyd Ensminger, finished first and was awarded a $150 watch. Besides being a regular watch, the timepiece is also a stopwatch and tells the day of the month and the month of the year.

Lois and Harry Radford have moved their flower shop formerly housed in the basement of their home into the north half of the R.L. Scott building on main street. They have enlarged the shop to include gifts, figurines, novelties, plants and planters and a line of infants' and children's wear.

Ricky, a pookie owned by Marlow Sharpe, was the first customer to get trimmed at the new Doggie Boutique in Haxtun. The boutique is operated by Betty Johnson. She is assisted by Pauline Freys.

Fleming News - Sgt. and Mrs. Robert Hansen and Jeremiah have returned to their home in San Antonio, Texas, after being guests in the home of Rev. and Mrs. V.L. Booher for two weeks.

One of the first lessons new German teacher Amelia Wirth gave her first-year German students was in geography. Pictured with sons Adam and Joshua, Amelia says she and the boys are enjoying their new school.

Don and Connie Ruetter of Thermopolis, Wyo., are the parents of a baby girl, Michelle Lu, born Sept. 5, 1992.

Darcy Garretson, English instructor at Haxtun High School, graduated from Regis University in Aug. 1992 with a master's degree in language/communications. She was hired by the school in 1984 to teach English.

The retirement of Marilyn Miller as Paoli Postmaster this past July 31, could mark the end of an era for the town she's served for over 45 years. The lease for the building attached to Marilyn's home and rented for the Postal Service terminates the end of November when the Paoli Post Office closes unless the Service opts to rent another location, which Marilyn feels unlikely.