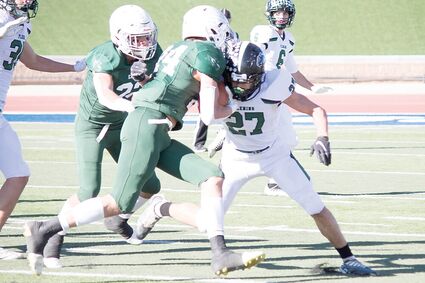 SENIOR NOLAN Japp puts a hit on Stratton ball carrier Cyler Notter in the opening minutes of the State Championship in Pueblo on Friday.

Two out of three is nothing to complain about. And that's what the season came down to for a group of six Fleming Wildcat seniors who, for the third year of their four-year high school football careers, went head-to-head with Stratton for the 6-man State Title.

An exciting semifinal win over third-ranked Granada in overtime gave the Wildcats their spot in the title contest. The win would pit the second ranked Wildcats against the top ranked Stratton Eagles.

Fleming knew they'd have a fight on their hands when they took the field on Friday at CSU-Pueblo's Thunderbowl to face Stratton for...