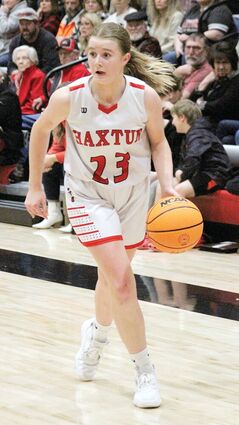 HAXTUN LADY BULLDOG #23 Kelsie Hadeen brings the ball up the court in a home contest with Holyoke last week.

The Lady Bulldogs picked up their second win of the season over the Holyoke Lady Dragons last week, this time on their home court in front of a packed house. The two teams met in December in a holiday tournament in Sterling where Haxtun picked up an 11-point win.

This outing, Haxtun hosted Holyoke for a mid-week match up. The Lady Bulldogs went up 17-6 in the first quarter and added another nine in the second to hold onto a 26-15 advantage at half time. Haxtun upped the score by 11 in the third and 13 in the fourth for a 13-point spread in their second victory over the Lady Dragons this season.

Starkebaum also led under the net in rebounds. She pulled down six on offense and four on defense for a total of 10. Grace Gibson nabbed five rebounds under the basket. Goodwin, Goddard and Anderson each came down with four.

"From the first buzzer of the Holyoke game, the girls had the above mindset. Everything fell into place for our Lady Bulldogs that night," said Head Coach Alicia Schram. "Holyoke had a hard time handling our defensive pressure and our inside game was hard to guard. We out-rebounded them 31 to 20 and we never sent them to the charity line for free-throws. It was a great overall win for our girls."

Saturday night action pitted the Lady Bulldogs in a match up with the higher classified Yuma Lady Indians. The Indians, now in 3A, entered with a 5-2 record.

The contest with Yuma was close throughout the first half, both teams putting seven points on the board in the first quarter. Haxtun came up shy of two points to hold onto the tie game with the Lady Indians throughout the second, giving Yuma a two-point advantage at half time. A slower start to the third quarter gave the Lady Bulldogs a deficit too deep to chip out of while Yuma kept the pressure on. Haxtun battled in the fourth, putting 14 points on the board, but came up short at the final buzzer, 45-34.

Anderson led the Lady Bulldogs on Saturday with 15 points. Goddard trailed with 10 points followed by Starkebaum with seven. Under the basket, Starkebaum came down with 15 total rebounds. She nabbed six on offense and nine on defense. Goddard pulled down 11 total rebounds. Gibson registered five.

"Yuma is a much bigger school - based on the last official count they have 251 students to our 80. Even with the huge enrollment difference, I was so proud at the way our girls played against them," said Schram. "We out-rebounded them 38 to 26 and if we had just made a few more shots - the outcome would've been much different. I hope the girls realize how much they are improving. The difference from the first game of the season to today is unbelievable. They should be incredibly proud of themselves."

The Bulldogs have a busy week of travel ahead as Friday night's action takes them to Julesburg for a match up with Sedgwick County. On Saturday, the team is set to take on the Bulldogs in Otis.

The Lady Bulldog basketball team improves their game each week and according to Schram, that is because of several things. "Two words - confidence and energy. I think the girls are finally seeing the potential in themselves that I (and the coaching staff) knew was there all along. It's an incredible feeling as a coach to see them implement the things we work on in practice that week and improve each game. I love the spark that those girls have at game time. The energy in the locker room before the game is indescribable - it's a mix of fire, focus and fierceness. I think energy has played a huge role in our improvement. It's important that the girls see energy from the coaches, bench and fans. It only fuels their fire. Rebounding continues to be a strong point in our game. We lead the LPAA with rebounds per game. We are very proud of that stat and strive to do better each game."