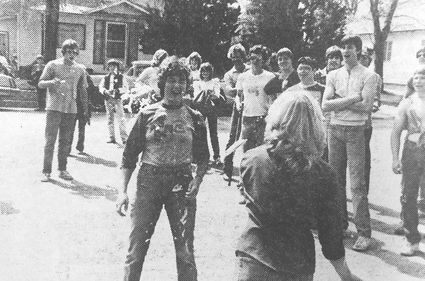 COACH CATHY Starkebaum takes a pie in the face after students bid for the right to throw a pie at their favorite target. The Haxtun High School students enjoyed a day of fun and games last week.

The Lutheran Church at Haxtun, which has been closed during the past three years except for occasional services, will be opened the early part of June for regular church services. A minister has been engaged.

Flood water takes three lives Sunday night: Grim tragedy struck the Haxtun community late Sunday evening when Mrs. Elsa Lewein and her two children, Donald, 6, and Irene, 4, lost their lives in the flood waters at seven and a half mile creek south of Haxtun. Earl Lewein, husband and father, who was with his family, managed to swim to s...