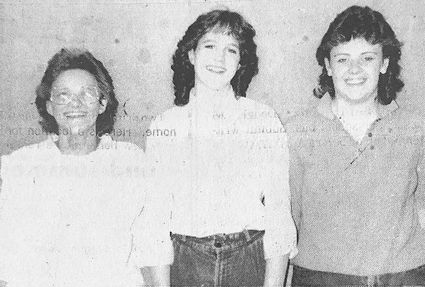 LAURIE WIEBERS AND KAREN SHIVELY were recently selected to attend "Girls State '85." Three nominees, Joy White, Laurie Wiebers and Karen Shively competed for this honor. Each candidate had to rank in the top third of their class. Each had to write a letter to the American Auxiliary stating why they wanted to be selected. Laurie and Karen were chosen to attend this year's convention at Mesa College in Grand Junction, June 8-13. While there, they will be studying government and how it functions.

Ridding the crest of a huge wave of votes, candidates on the Progressive ticket were swept into office by a solid majority at the municipal election at Haxtun Tuesday. Attracted by the wet and dry question and by minor issues of the two parties, citizens of the town recorded what is believed to be the largest vote in history. Mayor J.C. Nauman, who was unopposed for reelection, was given a fine vote of confidence by both parities. The six trustees who will head the city government during the coming two years are O.K. Clark, B.B. Williams, Ben J. Anderson, L.F...