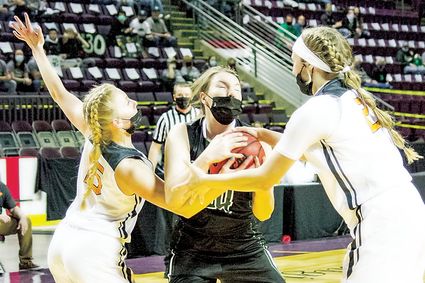 LADY WILDCAT senior Kendyl Kirkwood fights for the ball under the net in Sunday's Championship game against Flatirons Academy. The two teams met up at the Broadmoor World Arena in Colorado Springs where the Lady Bison defeated the local ladies, 64-52.

It was a story of underdog victories last week in the Final Four round of the Colorado 1A Girls' State Basketball Tournament. After entering the State bracket in the number six slot, Fleming's Lady Wildcats exited on Sunday as the State Runners-Up, knocking the number-two ranked Kit Carson Lady Wildcats out of contention on their way. With a first-round bye and wins over Simla in the Sweet 16 and Sangre de Cristo in the Great Eight, the Lady Wildcats made their way into the Final Four.

Last week's semifinal round put Fleming on the road to Kit Carson where they took on the second-ranked...