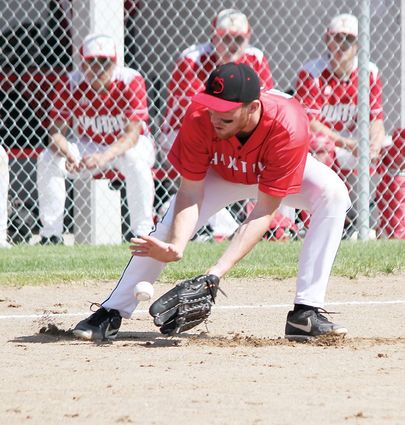 RYAN TEMPEL fields a ball at third base during a home match up with Yuma earlier this month.

Midway through the season and the Bulldog baseball team holds a 4-4 record. With just two double-headers and a one contest match up with Briggsdale left on the schedule, Haxtun holds the sixth seed in 2A/1A Lower Platte League baseball standings, according to Maxpreps. Wray comes in first ahead of Merino, Sedgwick County, Akron and Caliche. Haxtun holds a 4-3 league record.

The Bulldogs, who were originally slated to travel to Akron last week, ended up hosting a home contest with the Rams due to rainfall in Washington County that left the Akron field under water. The Rams jumped to a...